Is it Spring yet? Nope! It snowed this past weekend (AGAIN!), and I’m thoroughly over Winter.

I’ve spent countless hours on the treadmill over the last two months, and it’s about time for an update now that I’m headed into race season. Race season? THAT’S going to be ugly! This winter has been rough for much of the country, and Ohio was no exception. I used to not-so-lovingly call that torture device in my basement a dreadmill. No more! I love that thing. Without it, I’d be in trouble! My job is also keeping me pretty busy and active. So much to be thankful for!

As you may (or may not) recall, I’m keeping a paper log this year. No fancy online records, though I have been using my watch or phone to record some of these. I’ve really cut down on how much I talk about running online as well, save an occasional post when I think it might motivate others and myself! It’s been long enough…so here it comes…stop reading now if you don’t care, or don’t want to know just how boring my life really is.

To some, that might not look like much. To others, it’s a lot! I wasn’t sure either way, so I looked up the numbers for January and February 2013. 137.96 and 108.97 respectively, running and walking combined. Sounds good!

On April 12th, I will have the pleasure of volunteering at a great race…Forget the PR 25k & 50k. You can find the link on my Need a place to race? page. 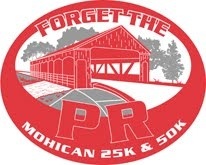 As a favor to his volunteers, the RD holds a Volunteers’ Race before the event, so we can all run the course, earn our shirts and get a buckle. It helps him out as well…to point out any potential issues the trail may have encountered over the harsh winter. Plus, we get lost so on race day you won’t have to! Isn’t that nice!

I plan to run that day with another friend I’ve really missed seeing this winter. I don’t think we’ve run together at all since October. Good thing we’ll have a lot of time to catch up.

I only have one concern: Big Ass Hill…x2! Where is the setting on the treadmill for this?

Oh well…Sunday is fast approaching, and there’s nothing I can do about it now. Happy trails!

Use the Discount Code 1MILE2GO to get 30% off your next ENERGYbits order!